Talk to our experts:

The Journey from Stand to Suites 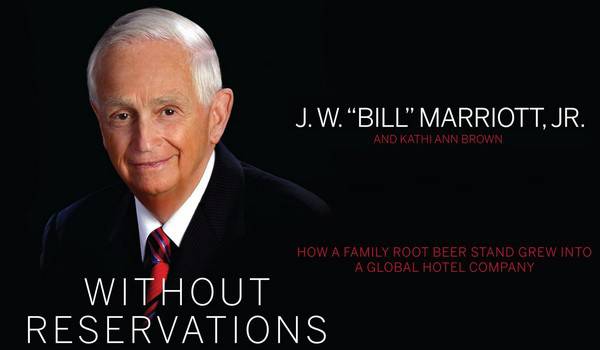 J.W. “Bill” Marriott Jr. one of the leading hoteliers, the Chairman of Marriott International Inc in an interview with Dan Schawbel about his book Without Reservations: How a Family Root Beer Stall Grew Into a Global Hotel Company discussed about his journey so far and idea behind the book.

Marriott owns 3,700 properties in 73 countries around the world, Mr. Marriott has put 50 years of his leadership into this company and with help of those efforts today the group has grown into a world leading lodging business.

Mr. Marriott decided to step down from his position as a CEO, and that seemed like a perfect opportunity to write the book about how he grew the business, the problems he faced and the 5 rules he followed and career advice for others and more.

One of the biggest obstacles that he thinks he faced was the aftermath of 9/11. The way travel industry was affected and the recovery of Marriot associates and guests impacted that day. It also brought changes in the global expansion. The global turmoil of 2008 and is a major recent obstacle that was faced by the Marriott group, still he tried to manage that and thinking about his employees he kept them at reduced hours but full health benefits.

He always puts his employees first, that is one of the five rules that he mentioned in the book and he has learned that since his childhood that his father used to teach him. His father always told him and his brother Dick “Take Care of your employees and they will take care of your customers”

The other four rules are simple to mention but he followed them stringently, Pursue Excellence, Embrace Change, Act with Integrity and Serve our World, these are the rules that led Marriott International to a success.

A very important career advice that he gave was “You have to Challenge Yourself”. Always try to improve and success is never final, this is what people at Marriott believe.  Dan Schawbel stated that it was a pleasure interviewing Mr. Marriott and the book written by him is something really worth reading, especially for those who want to get the teachings from the real life experiences of one the most successful entrepreneurs.

OGSCapital’s team has assisted thousands of entrepreneurs with top-rate business plan development, consultancy and analysis. They’ve helped thousands of SME owners secure more than $1.5 billion in funding, and they can do the same for you.

OGScapital – Serving you with offices in the USA, the United Kingdom, and Canada.

Buy Side Due Diligence Services

How Much Does Сost of a Business Plan?

Who Can Help Creating a Business Plan?

OGSCapital Reviews the Impact of COVID-19 on Startups in 2020

Starting and Growing the MWBE is All About Relationships

Any questions? Get in Touch!

mentioned in the press:

Get Your Free Consultation

Fill the Form and we will revert to you ASAP

OGScapital website is not supported for your current browser.
Please use:

Get A Free Consultation!